In September with much enthusiasm I had applied for this workshop conducted by HENI, George Institute for Global Health, Azim Premji University and Heal. I've written about my application in my previous post. This is the first workshop I'm attending with "Health inequities" as the main concept under discussion. Ofcourse other workshops and seminars at IPH are always talking through this lens including the recent workshop on Realist Evaluation.

Today was the day 1 of the workshop. It's a 5 day workshop at Visthar CRC and we are provided accommodation for all the nights so that we can spend enough time with everyone and even as Bangalore residents not worry about commuting daily. I took an auto and reached well in time for the lovely breakfast.

Like the name of the place "Visthar", the discussions and people participating in the workshop were also quite diverse and multi-dimensional. Workshop started on time by 9 am when we were seated in a semi-circular warm fashion. Introductions of the main speakers of the day Dr Arima Mishra, Dr Devaki Nambiar and Dr Tanya Seshadri followed by participants were done.
I was delighted by the diversity of the group in terms of their background, the current organisation, work and communities they work in. We were a little more than 20 participants, and just to depict the diversity, there were social scientists, people from law background, journalist, Anthropologist, from companies, George Institute, Centre for Equity studies, professor at a University for public health, ICMR, TDU. People working with tribal communities in various places, rural communities in Bihar, for maternal health in Orissa, homeless people and migrants in Delhi, LGBT communities in Chennai, Bangalore (that would be me) other communities in Kerala, Pune etc.

Following introductions, we had a cool exercise facilitated by Dr Renu Khanna called "Power walk" (also known as Privilege walk I guess) where we were each given a slip with an identity and we were made to stand in a horizontal line and take a step forward only when the facilitator read something that we thought we as the given identity could actually do in life. I was a 14 year old school boy. So the statements made were like, "I have access to 2 meals a day", "I can read the newspaper everyday", "I have access to information regarding TB and HIV", "If my parents were to die, I would inherent their property/have rights to their property" etc. I had to add layers to my identity  in order to decide whether I could take a step forward to these statements. So I added that I go to a Government school in a rural area. By the end of the walk we were all scattered with a few reaching the end, a few having not taken any steps at all and most in different levels of middle area. We then discussed about how these inequities played it's game. How each of the layers influenced the person to be more or less privileged (concept of intersectionality) How we felt being left out/going ahead, how our own biases and stereotypical thinking influenced our steps. Like how we assume that a woman though being a police has less privilege.

We then had lecture 1 on Intersectionality by Devaki Nambiar and lecture 2 post lunch on Concepts and frameworksby Arima Mishra and Devaki. To read, follow the next post. 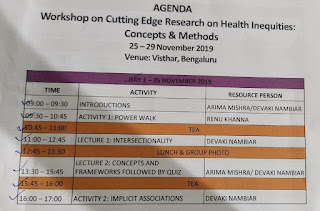