Yesterday, I was told to savour each day's learning rather than just eating a lot. I liked that idea. Because learning takes a different shape when given enough time to reflect on, and form consolidated applicable information.

I applied the 3 pillars of evidence based practice to the couple who had been referred for adult vaccination by Dr Rao. Not that I had never applied, but I never had the time to actually reflect on what were the arguments in each pillar I was applying. The pillars being- 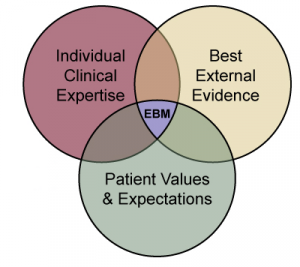 The wife was 62 yrs and husband 69 yrs. They had their wonderful family physician Dr Rao who had referred for vaccination to us. They actually expressed while taking history how they approached him for every health issue and felt safe. That reminded me of my grandfather who also was practicing family medicine doing home visits with his suit case. Those days I thought he was old fashioned but now when I don't have a family physician myself, I'm starting to requestion myself.

Since they were elderly, and the husband had chronic lung condition, I wanted to offer them pneumococcal and Influenza vaccine. As I knew they were coming, I got some time to look up on the guidelines and literature. So my dilemma was-

After 65 yrs, one is given PCV13 followed by PPSV 23 after a year to enhance the seroconversion and protection levels for the common strains. But for those adults less than 65 yrs just one shot of PPSV23 is recommended. Eventually when they turned 65 and beyond, they have to be given PCV13 as well. And a few studies showed that giving PCV 13 followed by PPSV23 was better rather than the other way round. So I was confused whether to give the wife just PPSV23 or start with PCV13.

That's when RK asked me to apply the 3 pillars. According to my clinical judgement, it made sense to start with PCV13 as she was close to age 65. I explained the same to her and she was happy to go with that logic. Thus the completion of the 3 pillars.
I'm yet to read up on the efficacy and other aspects of the adult vaccines and the same will follow in my next post.
Posted by Swathi SB at 15:45 No comments: