I am planning to make this a series of posts. Posts documenting my journey in building practice, in becoming the primary doctor for a set of people. All the discussions, experiences, and skills learnt will be put in a useful manner as far as possible.

Recently,  I saw a patient ABC who was diagnosed with HIV few months ago elsewhere and was started on treatment. But had come for a second opinion about his illness. I could see that he felt lost and had many doubts. He was sitting quite far from me, across the table with his relative being closer than him. I was finding it hard to ask him questions and I could see that the same feelings were reciprocated in him as I got very superficial answers. In order to gain trust of the two, I continued to have a detailed conversation and history taking, did examination in front of the relative, smartly made him sit in a chair closer to me and then requested the relative to give me some time to talk to the patient alone. The relative agreed and sat out. That's when I could ask him about his real concerns. That's when I felt real connection. And I think the same was reciprocated by him as he then mentioned that he still couldn't accept the diagnosis, had doubts about it. No doctor had actually talked to him about it after diagnosis, life had changed. RK, my mentor had introduced himself and left, giving me time to come till this point, when he pitched in. When I stated the patient's concerns to the patient and then was trying to figure out how to address those, I was a bit confused. That's when RK suggested to the patient that we'd set an agenda for the visit and told him genuinely that we will walk through this step by step and that we'd be there with him etc which reassured him. I told him that I'd want him to be okay with the diagnosis and that he'd be healthy. He looked better. Then we did some tests etc..etc.

After he left, RK suggested an exercise where he'd written down some important etiquette that would help in building rapport, that makes a patient comfortable, respected and the whole process of consultation more efficient. I had to rate myself 1-10 on those points, he rated me too and Praneeth and our psychologist Aji nicely discussed what techniques they use out of their experience for each of these points. 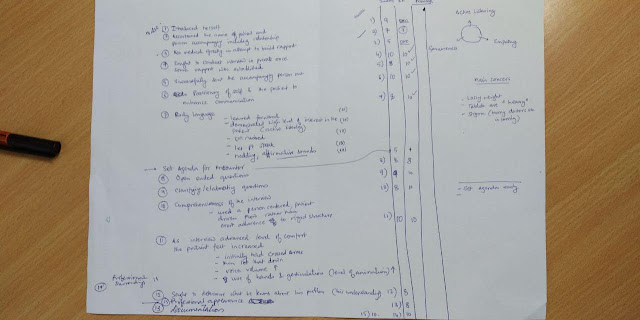 As an intern in a government hospital, I had learnt to help the patients get through the system. To fill in the gaps. Like, teaching them how to take their prescribed medicines, how and where to get the investigations done. Talking to them about what their diagnosis was and what was being done for it and what they had to ensure.

As a fellow in HIV at SVYM, I learnt that care can be 100 X better with the right attitude people around. How to give holistic care. Since I was seeing OPD patients on not a regular schedule, it was only rare to see the same patients in the opd in a planned manner. So every patient I saw, I'd make sure I gave them all the information, and advice they need. I never was a primary doctor to anyone except a few of them who valued my care and stuck to me over the phone. But it was never a plan. I never asked anyone to come back and see me next Monday or so. (Not that this experience was bad, but not enough for learning how to be someone's doctor)
But now, I have the time and space to build relationship with my patients. To ask them to follow up. To go slow and not bombard them with information.

This is the first and major behaviour I've to embrace. Starting to think of every patient as my own and plan accordingly.
Praneeth, my colleague has built his practice beautifully. He was telling for each of the above points on paper how he manages to do it.
He told us how he remembers some important details about the life of his patients. Not just their symptoms, but who they are, what they like, what they're going through etc etc. He used to make notes before. Now its natural to him. It made me remember a poem I wrote once.

So out of all the discussions, I've mentioned a few here-
1. In order to build rapport, we often call the patient by their name. What happens if their name is difficult? Ask - "What shall I call you as?" or be honest and say, "I'm having difficulty in pronouncing your name, what do you prefer? Help me with it" etc. It shows respect.

2. Keep a sheet to scribble important things you want to remember.

3. After sending out the relative, I had to explain to the patient why I did so. Something like "sometimes for some reasons, we can't be completely comfortable with mentioning everything to our relatives. So I sent him out. What you share now, will remain within this room."

4. Asking the patient "how much time do you have". This will not only give them a sense that we value their time but also help us plan our agenda.

5. "What is your main concern?" always works.