Reached in time for the sun rise in the east coast in Pondicherry on Sunday morning. Hungry and dehydrated after a 2 km walk from where the bus stopped. Thanks to Varsha who had mentioned about Aurobindo Ashram guest house which provided accommodation for a reasonable cost. Though there is restriction of being back in the house before 10:30 pm, we found it suitable for our plan. It's funny that when I looked up her blog to link it above, I saw that she is off to Sikkim at the moment.

Pondicherry was hot and humid, and me being a person who turns off the fan each time someone turns it on in Bangalore, had the fan running in high speed and yet feeling the heat.
That morning, we had yummy omlette and dosas at a local vandi which later became our breakfast friend for the next 3 days.

Once we settled in the room, got some good sleep that I had lost in the sleeper bus while treating a patient in my dream the previous night.

Akshay's brother, Ajay joined us from Chennai that noon though he had an exam on economics to write a day later.
We had got a suggestion from Aji and Riya to eat at fishaurant and we did the exact thing. I think to get the feel and sense of a place we need to savour the local food. And what's sea without sea food?! For those who know me, I have a complicated relationship with non-veg food. I love chicken but I choose to eat it very rarely. (only when it's going waste after a friend orders it :P or when I'm traveling and want to experience everything possible) This is not because I'm born to be a vegetarian but because once I saw a bunch of hens waiting to get butchered and ever since feel sorry for them. But sea food? Hmm..they are plenty in number, small in size don't really make me feel sorry. At fishaurant we ate everything. Prawns, fish, squid, crabs. All three of us were eating crab for the first time. You can imagine the amount of confusion and embarrassment we were in. At first Akshay ate up the entire crab leg from his soup with all the hard parts while I was telling them that some parts are meant to be removed. We took the help of the waiter and the chef to understand how to eat the crabs. We crack them in the mouth and eat the parts that we can and spit the hard and intuitively non-edible parts. Simple. Serving these creatures as whole enables mindful eating I guess. Anyway, that was a seaful meal ending with elaneer payasam with tender coconut chunks it it! 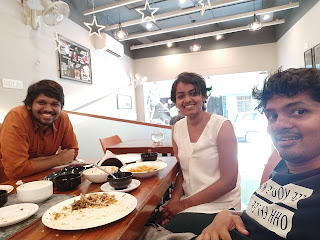 We had bought a Pondicherry tourist book with a map attached at the end from a shop near Fishaurant to help us decide the places we wanted to go and Akshay took charge of the navigation using the map like a sailor.

We first visited Mahakavi Bharathiyar Memorial Centre, a poet and social activist I hadn't heard of before but who wrote very progressive poems, articles in papers, about almost every social and political issue. About how women need to be thought of as equals, how one must not marry young, about how caste was ruling and making it practically anarchy, etc etc. Very inspiring. We weren't allowed to click pictures of these writings. We then then went to Bharathidasan museum preserving the work of another such poet with progressive vision who was inspired by Bharathiyar. Their houses were within 500 mts but they lived in those houses at different times :)
One of his poems talking about equality of gender he wrote,
"the cradle will swing, no matter who rocks it" made me really smile.

From there we walked eating ice cream on the long stretch of Goubert Avenue and street. The main street along the beach. We sat for a long time on the rocks along the beach. There is something mesmerising about the sea. It connects people, collects stories, brings out thoughts, reflections, decisions, smiles and serenity. One can spend a lot of time with it and still feel it inadequate. I was thinking about how the tsunami waves might have looked and what feeling it would have brought to the people witnessing it. *Chills*

Ajay left that evening back to IIT, Chennai and we ended up eating all the street food that our tummies could take. One vandi is worth mentioning because of how attractive they had made their business. They had stuff being grilled - chicken, prawn, paneer, potatoes and a bike standing to display their menu on a board which was wonderfully lit with tiny lights, and many dogs to feed the left overs. They had battery backup, freezer to store a lot of meat and a crowd to finish that up.
Posted by Swathi SB at 23:10